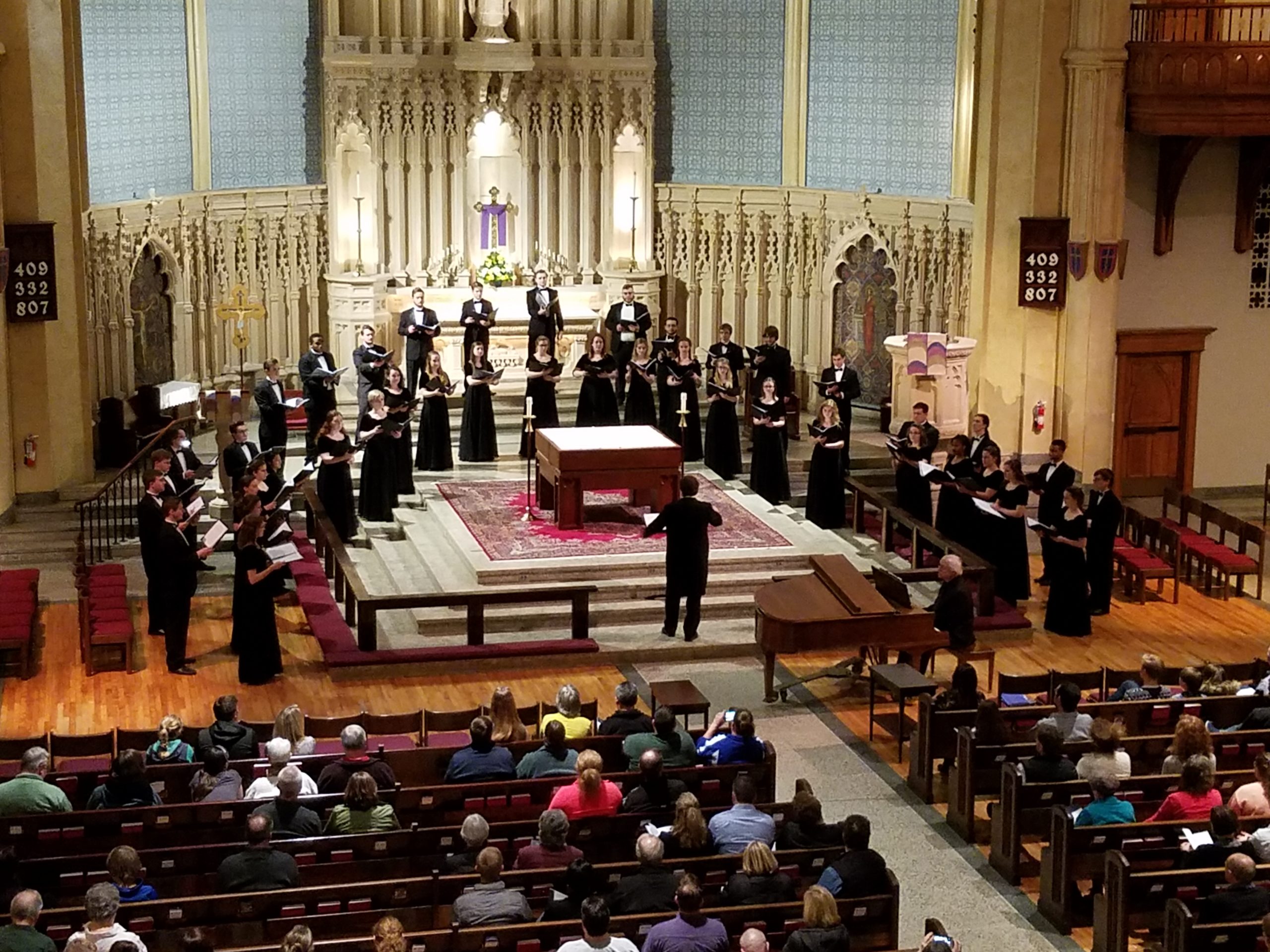 Enjoy a lunchtime recital performed by the Carthage College Choir today at 13:30, conducted by Dr. Eduardo Garcia-Novelli. Admission to the recital is included in regular cathedral entry.

Founded in 1927 as the Carthage College A Cappella Choir, the College’s premier vocal ensemble is now in its 95nd year. Originally a choir that performed a cappella choral music solely from the sacred repertory, the choir now performs sacred and secular music from the full expanse of choral traditions. Since 1973, the choir has taken 16 European tours to Austria, Czech Republic, England, France, (the former) East and West Germany, Holland, Ireland, Italy, Northern Ireland, Poland, Scotland, Switzerland, and Spain. The last tour took the Carthage Choir to Hungary, Slovenia, and Italy in January of 2018. The choir tours Europe every three years during the College’s January term. Most recently, under the leadership of Dr. Eduardo Garcia-Novelli, the choir toured Austria, Czech Republic, Germany, and Hungary in 2009; Ireland, Northern Ireland, and Scotland in 2012; and Spain in 2015. The January 2018 tour includes Hungary, Slovenia, and Italy. Carthage Choir was selected to perform before the membership of Wisconsin Music Educators Association (WMEA) in October of 2009, and again in October of 2012, both in Madison, WI. The Choir was honored with an invitation from the Wisconsin Choral Directors Association (WCDA) to perform before its membership in January of 2011 (Green Bay, Wis.), in January of 2014 (Milwaukee, Wis.), and in January of 2017 (Wausau, Wis.). The January 2018 tour included Hungary, Slovenia, and Italy. Carthage Choir won first prize in the Folksong Category and also first prize in the Classical Category at the prestigious Spittal International Choir Competition in the city of Spittal, Austria, in July of 2019. In May of 2011, the choir had the distinct honor of presenting a solo performance at Carnegie Hall, New York City. The Carthage Choir has premiered a number of compositions, including works by graduates and members of the Carthage faculty: Gregory Berg, Michael Burkhardt ’79, Peter Dennee ’86, Mark Petering, Brian Schoettler ’11, and Thomas Vigneri ’83. The choir had the honor of premiering O nata lux by renowned Norwegian-American composer Ola Gjeilo.

Dr. Eduardo Garcia-Novelli served as Director of Choral Activities and Chair of the Music Department at Carthage College for 13 years. Under his direction, the choir sang in 5 state conferences, 3 national tours, 4 European tours, had its solo debut at Carnegie Hall, enjoyed several performances at Chicago Orchestra Hall, and was awarded first prize in both categories at the prestigious Spittal International Choir Competition in Spittal, Austria, in 2019. Born in Argentina, Dr. Garcia-Novelli is a graduate of the Conservatorio Manuel de Falla with an undergraduate degree in music education, and the Conservatorio Juan José Castro with another undergraduate degree in choral conducting. Eduardo earned a Master´s degree in choral conducting at the prestigious Westminster Choir College in Princeton, NJ, and received his Doctorate of Musical Arts (DMA) degree in choral conducting from the University of Houston. He is active as a clinician, adjudicator, and guest conductor in the US; Europe, China, and South America. He is the newly appointed Director of Choral Studies at the University of Kansas.

Dr. Dimitri Shapovalov is a scholar, educator, and choir director. He teaches music history, music theatre analysis, and is involved in the choral program at Carthage College. Dr. Shapovalov’s professional interests include musicology, academic writing, music analysis, and choral directing. As a musicologist, he is a published author and translator on topics connected with Russian culture at the turn of the 20th century. As a choral conductor, he has served as the artistic director of A. F. Siebert Chapel Choir, the Kenosha Choral Arts Society, Carthage Treble Choir, and, most currently, the Carthage Choir, and is active as a choral clinician and adjudicator. Dr. Shapovalov earned his Ph.D. and M.A. from Cornell University. He joined the Carthage music faculty in 2005.