Christ Church Cathedral is one of Ireland’s most historic buildings and its story is fascinating.

The earliest manuscript dates Christ Church Cathedral to its present location around 1030. Dúnán, the first bishop of Dublin and Sitriuc, Norse king of Dublin, founded the original Viking church, which was probably subject to the archbishop of Canterbury. By 1152 it was incorporated into the Irish church and within a decade the famous archbishop Laurence O’Toole had been appointed. This future patron saint of Dublin began a reform of the cathedral’s constitution along European lines and introduced the canons regular of Saint Augustine forming a cathedral priory, which was to survive until the Reformation following the liturgical use of Sarum (Salisbury) in England.

Laurence O’Toole acted directly in diplomatic efforts between the Dubliners and the Anglo-Normans including Strongbow (Richard de Clare) following the capture of the city in 1170. It was due largely to John Cumin, the first Anglo- Norman archbishop, that the Hiberno-Norse cathedral was replaced with the Romanesque and later Gothic cathedral, parts of which survive today. In 1395 King Richard II sat in state in the cathedral to receive homage from the kings of the four Irish provinces O’Neill of Ulster, McMurrough of Leinster, O’Brien of Munster and O’Connor of Connacht. In 1487 Lambert Simnel, pretender to the English throne in the reign of Henry VII was ‘crowned’ in Christ Church as Edward VI.

In the sixteenth century, reform again came from England when Henry VIII broke from Rome. He dissolved the Augustinian priory of the Holy Trinity and established a reformed foundation of secular canons. On 22 December 1541 Robert Castle (alias Paynswick), the last prior, became the first dean of Christ Church. In 1562, the nave roof vaulting collapsed and Strongbow’s tomb was smashed, the current tomb being a contemporary replacement from Drogheda. The cathedral was in ruins and emergency rebuilding took place immediately. This temporary solution lasted until the 1870s! Since the collapse of the roof, the north nave wall has leaned out by 46cm / 18 inches. Political changes over the years were reflected in the changes of administration of the cathedral and following the virtual collapse of the cathedral system during the Cromwellian period, Christ Church was given a new constitution in 1660 which, as modified by the Church of Ireland’s general synod since 1870, is still the basis of the rule governing the cathedral.

In 1689 King James attended Mass here and for a brief period, the rites of the pre-Reformation faith were restored. One year later, returning from the Battle of the Boyne on 6 July 1690, King William III gave thanks for his victory over King James II and presented a set of gold communion plate to the cathedral. During the 16th and 17th centuries, Christ Church’s crypt was used as a market, a meeting place for business, and at one stage even a pub as a letter of 1633 shows: the vaults from one end of the minster to the other are made into tippling houses for beer, wine and tobacco.

In 1742 the cathedral choir together with the choir of St Patrick’s cathedral sang at the world premiere of Handel’s Messiah in nearby Fishamble Street. The Church Temporalities Act of 1833 brought partial disendowment and impoverished what had been one of the wealthiest ecclesiastical corporations in Ireland. When Charles Lindsay, bishop of Kildare and dean of Christ Church (a position which had been held together since the 17th century) died in 1846, the dean of St Patrick’s cathedral also became the dean of Christ Church. Not until 1884 did Christ Church have its own dean once more.

The cathedral as it exists today is heavily Victorianised due to the extensive restorations and renovations carried out by the architect George Edmund Street (between 1871 and 1878) at the expense of a Dublin whiskey distiller, Henry Roe, who gave £230,000 (€35m today!) to save the cathedral. The disestablishment of the Church of Ireland in 1871 saw further constitutional change and financial disendowment at the cathedral. With members of the laity now responsible for the building’s maintenance it became essential to provide for lay participation in its governance. A cathedral board of laymen (as was the case then) and clergy was formed in addition to the solely clerical chapter.

A two-year restoration of the cathedral roof and stonework was undertaken in 1982. Kenneth Jones of Bray installed a new organ in 1984. Further work since 1997 has included the renewal of the heating and lighting systems and the restoration of the massive 12th century crypt. This last undertaking was to provide the cathedral with a much-need facility for hospitality and to mark the millennium year 2000. It now houses the important Treasures of Christ Church exhibition, together with the superb video of the cathedral history by Louis Marcus. The exhibition features manuscripts and artefacts that give the visitor some impression of nearly one thousand years of worship in the cathedral and nearby churches. Outstanding among the rare church silver is the stunning royal plate given by King William III in 1697 as a thanksgiving for his victory at the battle of the Boyne. Also on display are the conserved tabernacle and the candlesticks used in 1689 under James II when the Latin rites were restored for a three-month period.

To mark the Christian millennium, two principal events took place among many others. In June 2000 Christ Church Cathedral Dublin: A History was launched by An Taoiseach, Bertie Ahern, TD and in the same week a five-day residential ecumenical liturgical conference, Ceiliúradh (Celebration) was organised, in which themes of music, art, architecture and theology were explored within a context of seminars, workshops, lectures and worship. 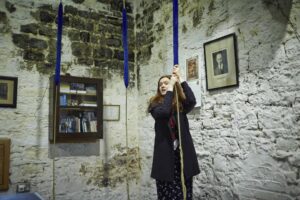 The cathedral’s 19th century bells — the oldest of which dates back to 1738 – range in weight from a quarter of a ton to 2.5 tons. Christ Church has a world record number of bells available for full-circle ringing.

The first mention of bells in Christ Church tower is an entry in the records for the death of John Kyrcham, ‘maker of our bells’, in 1423.

The Christ Church Cathedral Society of Change Ringers was established on July 31, 1670 and still welcomes visitors to join in-service ringing as well as practice sessions. For more information on ringing the bells, please contact our ringing master Ray Cregan at moc.liamg@yrflebccc.

On guided tours, you will be shown how the bells are rung and can even ring one of the bells yourself. Group guided tours must be booked in advance by calling +353 1 677 8099 or emailing ei.hcruhctsirhc@emoclew

As the belfry is only accessible by a narrow spiral staircase containing 86 steps, belfry tours are not suitable for those with reduced mobility, vision impairments, claustrophobia, a fear of heights or children under 12 years. Sensible footwear is required and no large bags are allowed.

If you’d like to find out more about the history of Christ Church Cathedral, there is a selection of books available in the gift shop.

Please note, we do not have a library or archive on site. If you have any historical queries, please contact our Research Advisor Stuart Kinsella at ei.hcruhctsirhc@sevihcra or see here for more information about Christ Church Archives and Publications.

We use cookies on our website to give you the most relevant experience by remembering your preferences and repeat visits. By clicking “Accept All”, you consent to the use of ALL the cookies. However, you may visit "Cookie Settings" to provide a controlled consent.
Cookie SettingsAccept All
Manage consent